Mystery Photo Number 11 comes via Corey and Alex Rubin. Your mission, should you choose to accept it, is to help figure out the who/when/where of the photo. 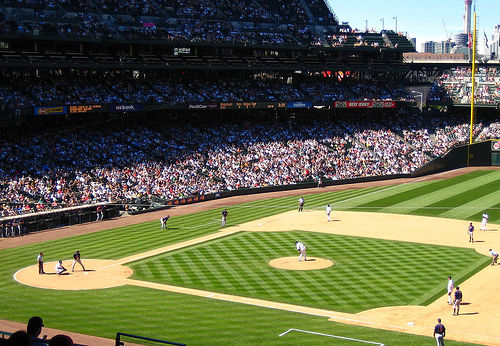 Thanks to all who have sent in photos. I have enough to keep us going another few weeks. Nonetheless, please send in more. If you have any old (non-copyrighted) MLB photos that might suit this game, please email them to mystery At humbug .com.

2.   King of the Hobos
It's 3:25, so the game probably started around 1:00 pm, and the bases are loaded for the Indians. Putz has only thrown 7 pitches, so it's somewhat likely, although not a given, that he did not start the inning.

4.   Eric Enders
Dubois is about to strike out for the second out of the inning. Jeff Datz coaching at first and Joel Skinner at third.

5.   Eric Enders
No idea who the silhouetted guy in the ballcap on the lower left is, though.

6.   EricGagnesGoggles
I do believe that is the Jake, not Safeco. Why else would there be an Indian logo on the left field wall? Not to mention the infamous elevated left field wall at Jacobs Field. This would be the bottom of an inning.

7.   Eric Enders
Why would the Indians be wearing gray and the Mariners white if this was the Jake?

And why would there be a Pacificare ad next to the scoreboard? According to its website the company operates only in Arizona, California, Colorado, Nevada, Oklahoma, Oregon, Texas, and Washington.

Compare it to this photo...
http://www.seatdata.com/images/venue_safeco_field/samples/sample.jpg

...and you can see that this park is clearly Safeco, and that the Indians logo is part of a scoreboard.

8.   Voxter
It's totally SafeCo. Les Schwab tires only operates in the Pacific Northwest. Also, I sit in seats a lot like these ones a lot of the time when I get to the ballpark; it's a familiar view to me.

9.   mikeplugh
It looks like the game was on Fox. There's a FSN logo next to all the Master Card ads on the 3rd baseline wall.

10.   mikeplugh
My bad...all the Mariners games are on FSN Northwest.

11.   mikeplugh
Judging by the flags in left field, the Red Sox are in 1st place in the AL East.

Barksdale was the HP umpire on July 30th, 2005. Putz pitched. The Broussard, Blake, Boone combo works with all the accompanying stats. The Red Sox were 58-45, while the Yanks sat at 55-47 on that day.

14.   Jacob L
I have nothing to add, as usual. You guys out-sleuth me every time.

I just want to submit the confusion apparent in 7 and 8 as evidence in my on-going rant entitled "all neo-retro ballparks look the same."