On a recent travel adventure, I happened to wander into a "Recycle Store", a business which tries to take one person's junk and turn into someone else's treasure.

This store happened to have a huge barrelful of old, discarded slides and photo negatives. Turns out that most of these discarded pictures were of sporting events. Probably 95% of them were pictures of NCAA and NFL football games, but there were some baseball pictures in the pile, too.

So I gathered up as many baseball pictures as I could find, and bought a couple handfuls of the old photos.

None of these photos were marked in any way, so there's the game: let's try to identify who the people are in the photos, and figure out where and when the photo was taken. 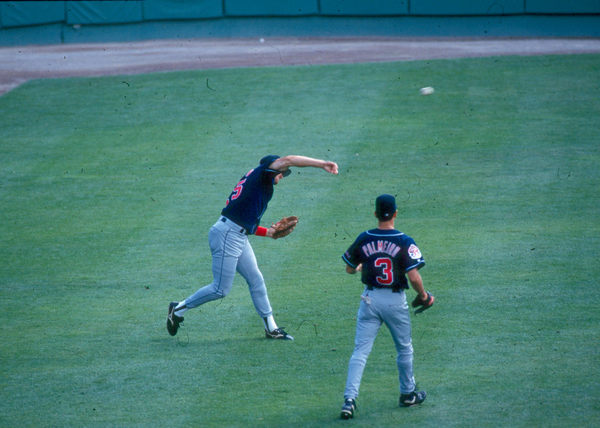 2.   Bob Timmermann
I'm pretty sure those are late 1990s batting practice jerseys for the Angels.

3.   Score Bard
OK, because I was confused...it looked like either a Braves or Indians uniform, but Orlando Palmeiro never played for either of those teams.

4.   Score Bard
So if that's the Angels, is the thrower Tim Salmon?

5.   Bob Timmermann
Well, Salmon does wear 15. I suppose the other digit could be a 1. It looks like a hard throw from an outfielder and not a pitcher doing long toss. It looks like a throw in anger. I think the Angels may have worn the solid blue unis a few times during interleague play when they started out.

That could be Qualcomm, but I don't recall it having any angles in the outfield like that.

And I'm betting that it was this game:
http://www.retrosheet.org/boxesetc/B07040CAL1995.htm

Since it was July 4th and it would be a more likely day for the Angels to wear a different uniform.

Orlando Palmeiro was a rookie in 1995 and played only a handful of games in center.

The light blue piping on the sleeve is the dead giveaway. What a fool I was not to notice.

11.   Bob Timmermann
8
I think that's the wrong font for the numerals. Also by that time, Anaheim had a different style fence in RF.

12.   Philip Michaels
11 I bow to Bob's knowledge of numeral fonts.

And that does appear to be the 35th anniversay logo on Palmeiro's sleeve.

15.   Bob Timmermann
I now have 14 tabs open on my browser in the quest to answer this question.

Yes, I have the day off.

Now, which ballparks in 1995 did they have games in which Palmeiro played CF, and Salmon played right?

Orlando Palmeiro has not played center field much so it's not a big set of games.

The green padding on the fence is pre-renovation Anaheim, when it was set up for Anaheim's nonexistent football team.

19.   Score Bard
Answers: Toronto (but it's not Toronto...that's not astroturf), Kansas City and Boston.

21.   Bob Timmermann
Preseason stories said the Angels would wear the blue jerseys every Saturday. The 4th of July was a Tuesday and they might have made an exception for the holiday.

The game that night drew 61,292, which was the biggest crowd in the majors at that point in the season.

The Angels were also in negotiations with Darin Erstad's agent on July 4, 1995 and deciding whether or not to demote Shawn Boskie or Mike Bieleck to the bullpen.

It's not KC. And it's not Boston. I'm pretty sure it's Anaheim. I think they wore the dark pants with the blue tops.

24.   Bob Timmermann
Yeah, I can see it being Boston now. That would explain the sharp angle in RF.

Given the strong nature of the throw (he's probably throwing to third) I'm guessing this was Valentin's fly ball to right for the 2nd out of the 4th inning, with runners on 1st and 2nd. He'd be making a strong throw to keep Alicea on 2nd base.

26.   Score Bard
A fly ball would also explain why Palmeiro is just kinda standing there instead of running.

27.   Upperdeck
It looks like Salmon is in center and Palmiero is in left because of the angle where the grass meets the warning track and the fact there's no foul line.

28.   Score Bard
27 I'm thinking you get that illusion because the picture is just beyond Pesky's Pole. It's all fair territory.

29.   Bob Timmermann
I really think it's a photo of me after climbing up and down to the Point Reyes Lighthouse.

Where was the "Recycle store?"

31.   Kels
I've been trying to find a similar picture taken in center field towards right at fenway with not much luck. Anyone else find anything like that?

32.   Upperdeck
Here's a field diagram of Angels Stadium but it is from last year. Notice the sharp angles in center.

33.   Upperdeck
Actually that's probably the road gray pants so it can't be Anaheim.

35.   Cliff Corcoran
Guys, it's definitely Fenway. I could tell before I even started reading the comments or doing any research. Fenway Green is a trademarked color and those walls are Fenway Green. Plus the road pants (teams will wear white pants with colored jerseys at home, grey on the road).

Sat, 9/2/95, Angels @ Red Sox at Fenway Park, 5-4 Sox bottom of the sixth. Against Mike James, Luis Alicea walks and a Willie McGee strikes out. John Valentin then flies out to right. This is a photo of Angels right-fielder Tim Salmon firing the ball back in to hold Alicea at first with center fielder Orlando Palmeiro in the foreground.

37.   Cliff Corcoran
The color is off in this link, but note the similar style of padding in this shot of Fenway:

Here's a photo that shows the sharp corner in the right field grass (bottom of linked photo):

And here's another from beyond the RF wall, note the padding on the left of the photo and the sharp corners in the grass:

38.   Cliff Corcoran
How embarassing, the first link in 37 is of Busch Stadium.

41.   Cliff Corcoran
For yucks I checked out my 1996 Topps set (which documents the '95 season) and flipped through the Angels cards. The Tim Salmon card (#319) shows the 35th Anniversary patch clearly as well as confirm the fact that Salmon wore a single red wrist band on his left wrist. The photo on the front of the card is of Salmon swinging with his head down and his face obscured by the bill of his helmet and he has an identical grimace on his face. The photo on the back confirms the way he wore his stirrups and shows his glove, which is also a match.

43.   Cliff Corcoran
Special Topps card bonus. The text on the back states: "In '95, Tim joined Don Baylor as one of only two California Angels ever to log back-to-back, 30-HR seasons." But the stats above accurately list his HR totals as:

44.   Jon Weisman
There was something inspiring about this thread.