Our eighth mystery photo comes from the slide pile I bought. Your mission, should you choose to accept it, is to help figure out the who/when/where of the photo.

And in this case, why. As in, why does one guy look like he's been in a fight, and why is the other guy laughing at him? 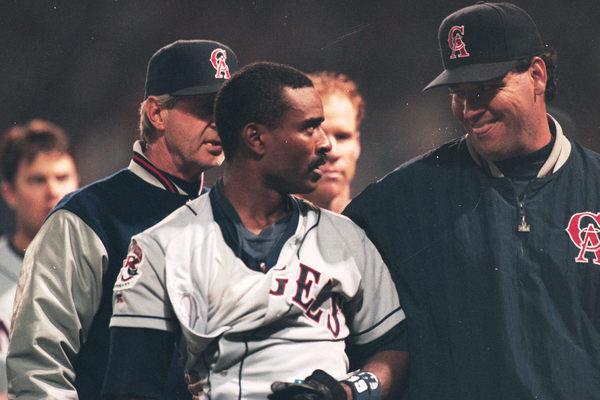 Thanks for all who sent in photos this weekend. I have enought to keep us going another couple weeks. Nonetheless, please send in more. If you have any old (non-copyrighted) MLB photos that might suit this game, please email them to mystery At humbug .com.

2.   DXMachina
The California Angels wore that uniform style from 1993-96.

3.   Cliff Corcoran
That's Tony Phillips. I think Rex Hudler is the redhead over his shoulder. And is that one of the Lachman brothers over the other shoulder?

4.   Dan Lucero
I might be way off, but that looks to me like Tony Phillips, who played for the California Angels in 1995.

6.   nickb
I think it's Marcel Lachemann.

7.   Cliff Corcoran
Tony Phillips played for the Angels in 1995, Marcel Lachemann was his manager that year and Rex Hudler was indeed a teammate.

9.   Eric Enders
It's Tony Phillips in 1995. I recognized him right away, but he also wore #19 that year which is on his wristband.

I totally recognize the coach on the right hand side of the frame but I'm freezing on his name.

I have no idea who the guy on the left edge of the frame is.

11.   Eric Enders
Damn, there were no posts in this thread when I started typing #9.

12.   DXMachina
The uniform looks more like a road uni than home whites.

13.   Cliff Corcoran
12 Definitely the road greys, if you're doubting the tint of the photo you can tell by the white outline on the letters.

14.   Eric Enders
"California's 10-8 victory over Boston last night started in a drizzle and turned into a 4 hour, 9 minute mess involving 13 pitchers, 3 key errors, and 2 benches clearing for a brawl.
...
"The brawl erupted in the seventh after Stan Belinda's first pitch to Tony Phillips was a called strike. Phillips argued the call and Boston catcher Mike MacFarlane told him to stop. They grappled and both bullpens and benches emptied. Order was restored after about five minutes and both players were ejected."

16.   DXMachina
Just by way of an amazing coincidence for Dodgers fans this morning, Rick Reed was the home plate umpire in the game referenced in 15. I tell ya, that guy is a mixer.

17.   coreyk626
Another possibility: September 3, 1995, also at Boston. Phillips left the game in the 5th. The only reason I suggest this one is because Mystery Photo #1 was from the same series (I think) and Score Bard said something about all the slides being from a limited set of games.

18.   Cliff Corcoran
Nice find Eric! I was going to speculate that, since the other Angels photo from Ken's mystery stack was a 1995 game in Fenway that this might also be in Boston given that we've IDed it as a 1995 road game. That find confirms.

Just when I was thinking we'd never get this one.

Rex Hudler was the starting second baseman in that game. Still no idea who the other two guys are, though something about the guy smiling screams "pitching coach" to me. Anyone have a list of Angels coaches from 1995?

19.   Dan Lucero
It's June 8th. A Lexis/Nexis search of "California Angels" + "Tony Phillps" + "brawl" pointed in that direction. Shame I was a little too late on this one.

20.   Cliff Corcoran
17 Hudler started at second in that one as well. In that game, Phillips was replaced defensively the inning after being called out on strikes. Any chance that called third strike resulted in another brawl that got Phillips tossed leading to the defensive replacement and that the coach is lauging at him because it was the second time that season? Pure speculation there.

22.   coreyk626
I found an article that says "In 1995, while playing for the Angels, Phillips started a brawl against the Red Sox when he rushed the mound after Roger Clemens hit him with a pitch."

...but Clemens wasn't pitching on June 8 (or the other game I suggested). The reporter is probably remembering things wrong. Or could Phillips have started 2 brawls in fenway in the same season?

24.   nickb
Definitely not Carew. Finding photos of the other dudes is more challenging...

25.   Cliff Corcoran
Clemens pitched this game of the September series, but didn't hit Phillips in that game (though John Habyan hit Jose Canseco, which could have touched something off). Hudler did not start in that game, but could have come off the bench to be in this photo.

Problematically, Clemens never did hit Phillips with a pitch in 1995. The only Angel batter he plunked was Tim Salmon, and that was in Anaheim, not Boston.

26.   Cliff Corcoran
25 Oops, sorry, I forgot to include the link to the September 1 game:

27.   Eric Enders
The pitching coach on the right hand side of the photo whose name I couldn't remember earlier is Chuck Hernandez, who was the Angels pitching coach in 1995.

28.   Eric Enders
21 I think you're correct, which means we've now IDed everybody.

29.   Cliff Corcoran
27 Hilarious that I knew he was a pitching coach! Good job again, Eric.

By the way, no Red Sox pitcher hit Tony Phillips with a pitch in 1995. I think we're back to our two primary candidates. Can anyone find a game story for the Sept 3 game to confirm or deny that there was a dustup after Phillips got called out on strikes in the fourth?

30.   Cliff Corcoran
Here's Snow from around the same time:

31.   Bob Timmermann
Jon sent me his comments, but I was a asleep. For the record, he ID's Lachemann and Hudler at 8:51 am PDT.

33.   vockins
Maybe a weather report would narrow it down? Seems they're dressed for a chill.

34.   DXMachina
The June 8th game was a night game. The September 3rd game was a day game.

35.   DXMachina
To add to 34, the photo looks like it was taken at a night game. Plus, as 33 notes, the coaches are wearing jackets.

37.   vockins
Definitely the June 8th game judging from the inconsistent shadow locations and the jackets.