Only two days into the existence of the universe, and God makes the firmament. It should be interesting to find out what He does with it.

Update: On the third day, God makes dry land and adds some plants, too. I wonder, how will they photosynthesize in all this darkness?

Sometimes the old traditions get it right.

The seven-day week is one of those traditions. The intention was that people would work hard for six days, and rest the seventh. But now people are resting the sixth day, as well.

If God had been 16.6% less efficient, we would have no animals, and no people. That sixth day can really make a difference.

Let us examine the productivity levels of the various work/rest permutations. Here we have one day of rest: Notice, even a four-day week is better than the 5/2 week we currently have, and a three-day week isn't much worse.

And what about three-day weekends?

Now who would want to work eighteen days in a row? Clearly, if we want an optimal balance between productivity and rest we should behold the sixth day. It is very good.

Batgirl's boyfriend of the day is Adam. Adam came up with all the names for the animals: 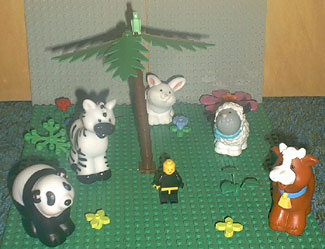 "And I'll call you Pandy, and you Stripy, and you Bunny and you Wooly, and you Moomoo."

Poor Adam had to sleep alone. Batgirl felt sorry for him. 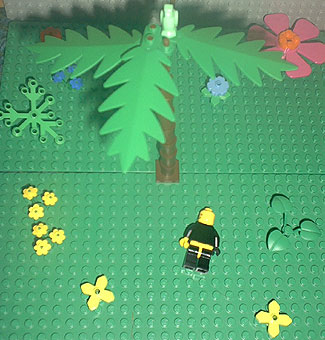 But then one day, a miracle happened! Adam got a girlfriend! 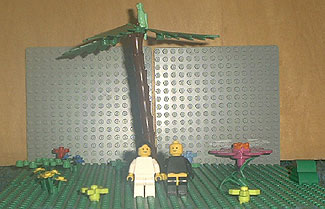 No, it wasn't Batgirl, alas.

Adam needed to have a rib removed, and would normally have been expected to miss six to eight weeks. But God used a new surgical technique to close up the flesh instead thereof. Adam is now considered day-to-day.

Blez: Where are you?
Adam: I heard thy voice in the garden, and I was afraid, because I was naked; and I hid myself.

Blez: Who told you you were naked? Did you eat of the tree that Billy Beane commanded you not to eat?
Adam: The woman whom thou gavest to be with me, she gave me of the tree, and I did eat.

Blez: Eve, what is this that you have done?
Eve: The serpent beguiled me, and I did eat.

Please forgive the self-promotion. Hope the formatting works! (am waiting for day you add file uploading to comments. :)

3.   Score Bard
Jeez, Studes, can't you wait for the sequel?

4.   Linkmeister
Well done, well done. I proposed that Jon of Dodger Thoughts have some architectural observations about the Garden.

7.   Batgirl
Batgirl saw it, and said it was good.

8.   jtshoe
Here's one I heard as a kid, a long time ago:
Did you know God is a baseball fan?
He begins his only book with "In the Big Inning"

A while back, I wrote a full piece on how we know God has a favorite team. Its the Dodgers of course (also my favorite team)! Its on my website if anyone's interested.

(By the way, "I wonder, how will they photosynthesize in all this darkness". This is a common misconception of English translations. Try reading the Hebrew, the light is there before - in fact it is in the first verse.)

9.   Linkmeister
jtshoe, if you don't put a link to your website up, how are we supposed to find this bit of expository writing?

12.   jtshoe
Sorry, I was distracted by taxes & I meant to remove the reference because its down for updates. It should be back up in a month or so. Its not a baseball site either. Its a philosophy site, but we've got a humor section. Its www.soundreason.org

Here's the piece on God and Baseball:

You're probably aware that God loves baseball. After all, he begins his only book with "In the big inning." But what you're probably not aware of is that God has a favorite team. Through the use of detailed analysis and Bible code, we were able to find out.
Well right off the bat, we are able to eliminate, for obvious reasons, the Pirates. God simply isn't going to root for a bunch of drunken sailors.
Other easy ones included the Diamondbacks, Devil Rays and the Giants. The D'backs, aka "the Snakes" to some local fans, are serpents. Duh, they are actually the favorite team of the other side! Devil Rays, come on, that's too easy. They're out. And the Giants, remember David and Goliath? They're out too.
What about the Brewers? After all, Jesus made water into wine. Yet, when we put it in context that the Bible teaches that drunkenness is a sin, we can nix them.
We ruled out the Tigers and Cubs based on Nahum 2:12-13a "The lion tore enough for his cubs, Killed enough for his lionesses, And filled his lairs with prey And his dens with torn flesh. "Behold, I am against you, declares the LORD of hosts."
The White Sox and Red Sox, were a little challenging, but we discovered the answer in Isaiah 20:2 "at that time the LORD spoke through Isaiah the son of Amoz, saying, Go and loosen the sackcloth from your hips and take your shoes off your feet. And he did so, going naked and barefoot." Note, that in the only reference in the Bible to feet after shoes have been removed reveals that God's people wore no socks. Therefore, God certainly would not be rooting for either sox team.
The Twins were another tough one. Paul arrived to Rome on a boat with "Twin Brothers for its figurehead" (Acts 28:11) and Solomon in the Song of Solomon often refers to twins in his complementing. Yet, we dug deeper and realized that Twins just cause trouble (i.e. Jacob and Esau). We eliminated them.
The Mariners were at first a likely candidate for God's favorite team. Consider Noah and his family and the numerous metaphors of fish and fishermen in the New Testament. Yet, we found this passage in the book of Jonah: "Then the sailors became afraid and every man cried to his god." (FYI - lower case g means someone other than the Big Man Upstairs)
The Cardinals, Blue Jays are Orioles are not good candidates. God likes birds to be sacrificed.
We ruled out the A's, Astros, Braves, Indians, Marlins, Mets, Nationals, Phillies, Rangers, Reds, Rockies, and Royals through complicated Bible code. It is too difficult to explain, and do try to look into it yourself because you might be deceived. Just make sure to only read our authorized publications.
Oh, and we can rule out the Yankees, well, because everyone whose not from New York and knows baseball, hates the Yankees.
So you're thinking the Angels. Ah, but remember, 1/3 of them fell. God is clearly still not over the situation as He is going to throw the rebels into the lake of fire. (see the later chapters of Revelation)
That leaves only two teams, the Padres and the Dodgers, and they're both in the same division (and realize its no coincidence that their in the same division as the Diamondbacks, aka "the Snakes"). The obvious choice of course is the Padres, but take a closer look. The Padres last made it to the world series in 1998. By pouring through recent books which actually foretell the actual date if the Rapture, we discerned the following. Look what happens if we first add 1 + 998. We get 999. And of course you can see what happens when we flip the number. So, we discovered the name "Padres" is really a cleaver disguise for another one of the enemies in the NL West division.
So, by process of elimination, we know that the Dodgers are God's favorite team.

and since this thread seems to have evolved into self-promotion, check out my own blog which features mostly Cubs humor and photoshops.

14.   cubshistory
Absolutely brilliant.
I love the idea of pulling these great bloggers togeather to recount the classics. I hope to see more of this.

Will Carroll's is my favorite.

That's why I loved it.

I liked this story better when it was the Rig, dig!?

17.   Jay
1 Now the LaMar was more crafty than any of the Mets head office the LORD God had assembled. He said to the Duquette, "Did God really say, 'You must not trade any of your prospects from within your system?"

4 "The fans will not surely be upset," the LaMar said to the Duquette. 5 "For God knows that when you trade them your team will prosper, and you will be like the contenders, and shall know the WILD CARD."

6 When the Duquette saw that the prospects were good for trading and pleasing to the scouts, and also desirable all general managers in the game, he took the KAZMIR and traded it. S

He also offered the HUBER to the Baird, who was there as well, and he took him. 7 Then the eyes of Mets management were opened, and they realized they were fools; so they spent $200 million in the offseason to cover their collective asses and prevent their slaughter at the hands of the Mets fans.

* Adam did name all the Earth's animals, but he did a better job of it in the morning. For example, by 9:00 AM he had already gotten around to naming the dog, howler monkey, and sturgeon. But by the seventh hour of naming, Adam just starting calling any old beast "komodo dragons" and "platypi."

* The eigth innings seems to be God's tiring point. At the beginning of years, He could only go for six days of creation. As He aged, though, God seemed to develop more of a tolerance for heavy workloads. A few seasons later, in a clutch situation, he was able to give the Maccabees eight strong days of light.

And God steps out into the garden. The crowd is on its feet now, sensing that something truly historical is about to happen. Everybody is feeling it now, even Adam, who steps out now to knock some mud off his feet. God steps off the rubber, doffs his cap, runs his fingers through his long white beard. The time now is the Sixth Day of Creation . . .

Adam steps back in. He looks a little bit nervous out there. God readies Himself for the pitch. He reaches back . . .

Oh my gosh! He's done it. God has plucked a rib from Adam and molded him a man. The crowd is really showing its appreciation. In the beginning, they said it was improbable -- but now the impossible has happened!

And God steps out into the garden. The crowd is on its feet now, sensing that something truly historical is about to happen. Everybody is feeling it now, even Adam, who steps out now to knock some mud off his feet. God steps off the rubber, doffs his cap, runs his fingers through his long white beard. The time now is the Sixth Day of Creation . . .

Adam steps back in. He looks a little bit nervous out there. God readies Himself for the pitch. He reaches back . . .

Oh my gosh! He's done it. God has plucked a rib from Adam and molded him a woman. The crowd is really showing its appreciation. In the beginning, they said it was improbable -- but now the impossible has happened!